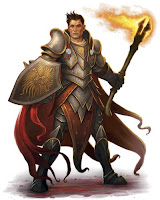 First off I must mention how much I really love the new cleric! I had played a Dragonborn paladin for the previous 3 sessions, and because people are starting to drop like flies from our Sunday night 4th edition game, my group needed a healer and because I was getting a little bored with the pally I volunteered. Don't get me wrong that is not a slam against the paladin class, it is good class with some good powers and they are the only class that starts the game with the ability to wear the best armor(s). I set my cleric up as a devout cleric, meaning I focused pretty much on healing and buffing my party. I'm a Dwarf so I can use a warhammer, but I hardly use it unless I stuck up against a wall or something, or I use my healing strike, other wise its lance of faith, sacred fire, or using a healing power.

What I didn't like about the paladin was mostly my own fault, because I didn't understand my role in the group, and I got a little bored just getting beat up on. I'm an old school D&D'er, meaning I expect my fighting classes to be big bad asses, more so at low levels, compared to the rest of the group at a low level, however 4th edition changed this, which I am happy they did.

The fighter and pally are no longer expected to deal big amounts of damage, with the right weapons, feats, and daily power you could easily pop off 20-25 points of damage, but your wizard, rouge, ranger, and warlock are the main classes to really hand out a beating. The previous editions of D&D always had the fighter class be the most powerful at level 1-8 and then slowly everybody else would get better and you would be as powerful as you were at level 10 as you are at level 15 and so on. Now the fighter has a bigger purpose along with the paladin.

I've always understood the concept of "party roles", however, because I'm not an online gamer, or at least I don't play WoW, I've never really had them specify defended for me the way 4th edition does. The fighter and pally's are defenders aka "the tanks", where as the ranger and rogues are "strikers" they get in and out quickly doing as much damage as they can do.

The way our party was set up playing a pally pretty much meant I could heal somebody twice per day with my lay on hands and keep the baddies off my buddies with various taunts. Which I enjoyed because I had an ac of 21 at level 2, which is pretty bad ass in my opinion, and as a Dragonborn I had a breath weapon, sure it was only a d6+3, but getting to breath fire, show me where to sign! Plus, you can do a breath weapon, and still attack and move, and if you really want to push the limit if you have an action point, use said action point use a power and move again, use a second wind and move around, you get the point.

I read a quote somewhere that said, "The 4th edition cleric isn't your daddy’s cleric." I couldn't agree more. The cleric is still your party’s healer, but depending on your chose of powers, feats, race, and gear what you do from cleric to cleric can really vary. In 3.5 the cleric had a laundry list of spells, most sad to say were either pointless or were never used because you spent all your time healing people. Now, they've taken away the stuff you don't use and improved the things you do use.

Healing word: This is an encounter power, however from level 1-15 you can use it twice and encounter and from 16+ it becomes 3 times an encounter. This power lets you say a pray basically and your ally can spend a healing surge and you get a d6+wisdom modifier in addition to that. Every few levels you add a d6, which is pretty flipping sweet.

After that the rest of your healing comes from powers, healing word is the only class feature that always you to heal, or at least its something you come with no matter which cleric path you choose. From their you have the at wills of:

Lance of Faith: Doesn't do any healing but it summons a lance of divine energy to hit your target for a d8+wisdom mod and give a party member a +2 power bonus vs. that target, on the players next attack.

Sacred Flame: d6+wisdom mod holy fire, and you give a friend either Cha+ 1/2 level in temp hp, or a save bonus.

Holy Strike: This is the only power I use my hammer with; the others are ranged attacks with more or less holy energy. Which is something I am getting use to because I do not have any at wills that are melee, there are at wills for a cleric that are melee not ranged, but that's the path I picked. I digress, this attack is based and is 2(W) or 2d10 with my hammer + and lets people heal.

Beacon of healing: Bad ass. If you beat the targets will (wis V will), the target becomes weakened and every body in a burst 5 (I think, my PHB is not in front of me) gets +5 healed and +5 temps, but because of healers lore, I can add my wisdom to the healing giving me them 10 healing, and they way I read it, but I could be wrong, +10 temp too.

I do feel that as a cleric I fell do not have a lot of actually healing "spells" or "prayers" but if you when you stand back and look at it objectively, you do. Healing word 2'x and encounter is pretty good, plus healing strike, if it hits, once an encounter. However Beacon is a daily along with cure light wounds, I think cure should be an encounter, it’s not that great of a prayer, and 1 extra healing is not going to make a balance issue in my opinion.

Wrapping up, the cleric rocks, it’s more versatile and is a bigger team player. Maybe not as far as damage goes, depending on your choice of battle cleric or devout cleric, but I feel like I am actually doing something to help the party other than just standing there taking a beating. I will say however with both of my at wills being ranged attacks if I go in to the front lines, be choice or force, I have to switch to my hammer and with out any at wills to use with it, swinging a warhammer isn't that great, which bottom line is the difference between 4th and 3.5, doing something cool every turn or swinging a hammer with d10+2 every round.
Posted by Ryan Walters at 8:36 AM

Ryan Walters
I am mid twenties, married, and proud parent of one, with a second on the way. Also, I am a former radio guy. I was the program director of a radio station in Sioux City for about 3 years. I was laid off due to the economy taking a noise dive.

Now that 4th edition D&D has been out for several months, how do you like it?